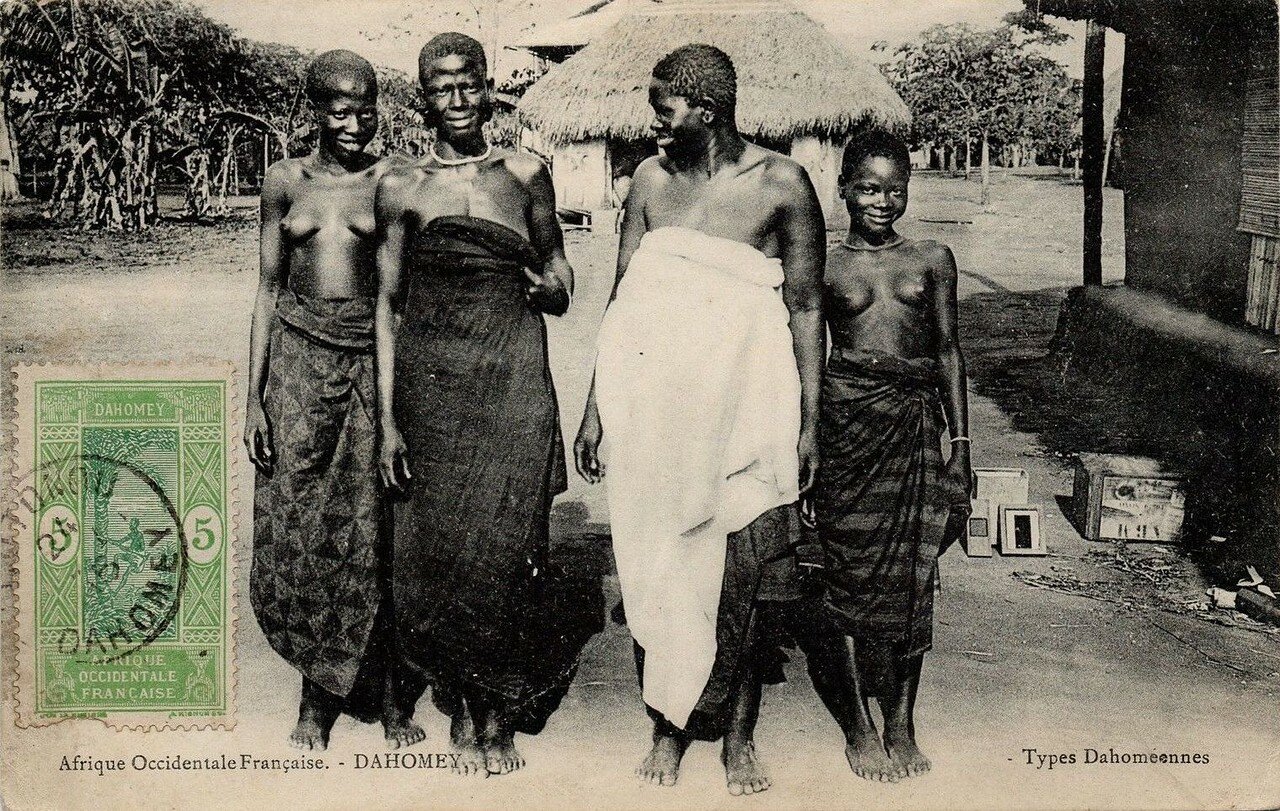 Dahomean women (chose this postcard because of the smiles)

Continuing on the badass women of Dahomey, this post will focus on the ahosi. I’ll add that the well-known Dahomey “Amazons” were considered under this category even though I will not be talking about them here.

Any dependent of the Dahomean King regardless of biological sex was ahosi of the King. Ahosi is translated to mean wife but according to Edna Bay, it is an amalgamation of “aho” which means “King” and “si” which is “dependant/subordinate” so it literally means a dependant of the King. This board category also included eunuchs, all ahosi were involved in the administration of Dahomey. Few ahosi ever became sexual partners of any monarch. Princesses on the other hand were referred to as ahovi, literally meaning child of the King the term is unisex. Certain women ahovi had the authority to exercise power within the royal lineage (for example Na Hangbe mentioned in the previous post). Another example of a princess named in oral history who wielded power was Na Geze, one of Agaja’s daughters. Na Geze used sabotage to help her father win control over the coastal kingdom of Ouidah. Semley states that these princesses are portrayed historically as young adult women associated with biological motherhood and warfare. They were young, ambitious women. Ahovi who were eldest daughters or senior sisters of reigning Kings sometimes were involved in the selection and installation of Kings. There is a blurred distinction between ahovi and ahosi, as princesses became wives of the King.

The palace was the King’s household and a city of women who worked with the King. Furthermore through the palace, women whether princesses or commoners had the greatest potential for gaining and exercising authority and power. Ahosi could scale the proverbial ladder in social status through the promotional system based on meritocracy available to all women depending on their personal ambition and achievement. The King was a man surrounded by women and eunuchs and I must say ever since learning more about the role of women in Oyo and Dahomey, I have seen more historical photos of West African monarchs surrounded by women and it’s always an “aha!” moment for me.

Although in popular Dahomean culture male was superior to female, in the palace women took precedence over men. Married women in Dahomey not only assisted their husbands but also earned income that was their own. Women in the palace who were similarly married to the King worked for him and also for themselves. They were farmers, food processors, traders, porters, artisans, ritual specialists and healers, guards, soldiers, messengers, spies, prostitutes, performers, political advisers, ministers, government record keepers and makers of state policy. In return for their services they were given cash, expensive cloths, slaves, land and control over villages. Certain ahosi were titled state officers, they built power bases within the palace, worked to serve the King or to assist princes seeking to become King.

Some ahosi were drawn from all lineages in the kingdom, and so used the palace to enrich the interests of their own lineages. Other ahosi were slaves, they were regarded as not having competing loyalties and were considered more trustworthy. Slave ahosi were guaranteed the product of their industry, they could amass their own wealth that was theirs alone. Like the Shogun’s ooku when a woman entered into the palace, it was permanent. She could not run back home even if she was  poorly treated. Unlike common women who could get divorces from unhappy marriages, wives of the King could not.

Now as for the ahovi, the princesses, among them emerged a woman known as na daho. The na daho is often referred as the most senior woman however she was not necessarily the first born but an elder who had appropriate leadership capabilities. The na daho was central to lineage decisions, installing new lineage heads and sometimes serving as regent. Bay writes that Na Hangbe may have been the na daho during her twin brother King Akaba’s reign so her serving as a regent after his death would not have been strange.

As children of the King, princesses were free in terms of sexuality. If a princess married, her husband could not control her sexuality because any child the princess gave birth to was considered part of her lineage and not her husband’s. Basically she could have sex with anyone she wanted because there would be no “prove to me that this child is mine” nonsense. Princesses did not have to balance loyalties between the lineage of their birth and that of their marriage. According to Bay the fact that they had control of their sexually made them socially male. In the households of their husbands, princesses had separate quarters and large entourage of retainers.

Outside commanding armies and influencing who would be the next King, princesses served the palace also as wife-ambassadors to neighbouring kings, sent to marry royalty of other kingdoms such as Oyo.

Edna Bay (1998), Wives of the Leopard: Gender, Politics, and Culture in the Kingdom of Dahomey

Lorelle D. Semley (2010), Mother is Gold, Father is Glass: Gender and Colonialism in a Yoruba Town

The High-ranking Women of Dahomey: the Mothers of the Leopard