Finally the proposal has been handed in! I’ve had only about 30 minutes of sleep but I feel it is better if I stay awake for as long as possible so as not to mess up my already messed up sleeping patterns. So my dissertation is due in September so I can at least have fun for at least a week before I start thinking about my outline, chapters…I don’t even what to think right now. I’m in a tired-but-cheerful mood so this post is going to be very light-hearted.

For those of you who know me and those of you who don’t,a it really shouldn’t come as a surprise that I find Asian men attractive. It really shouldn’t be surprising but I find that it almost always is.You should see the look on people’s faces when they see the current wallpaper on my phone. It is always fun to me but I wonder if it is that strange for black women to find Asian men attractive and vice versa.

This post was definitely an obligatory one for me (true confessions!) and will have two parts; this video (it cannot be embedded) mentions that couples involving an Asian man and a black woman are unique because they are rare so the first part will address this and the second part is just eye candy for those who may or may not think Asian men are unattractive.

Actually the reason I was on Youtube in the first place is simple, a girl I had recently met added me on facebook and it was then I discovered she is Korean. Anyway we were discussing the subject of Africans in Korea. I guess I should mention that this girl knows Nigerian pidgin (I’ll make a video of her speaking it soon). She said she had never seen any Nigerians in Korea and was saddened by that. However she had met Ghanaians and Congolese then I remembered a video I had seen on Youtube a long time ago and I told her about it. The video is entirely in Korean so I cannot understand it but it is a kind of documentary about foreign women married to Korean men. The video is below, though it is in Korean please watch the first 2 minutes of the video. That part is pretty understandable and funny too.

The woman in the video is from Congo and her name is Mimi, that is about the only thing I know. My friend told me something about her losing her baby while they were in Congo but I cannot know for sure, the video above is the first part of five videos.

There is a second video though I cannot seem to find it anywhere else apart from here so I cannot embed it. Click on the link if you wish but be warned the video is entirely in Japanese. Here is a short summary Fidea Kobayashi is from Tanzania, she works at a wedding restaurant and the highlight of the wedding is when she carries the wedding cake into the hall on her head. Apparently this was Fidea’s idea, she remarks that when Japanese people saw her carry things on her head, they were so excited and clapped a lot. I like that she talks about the racism she experienced in Japan, she was told to ‘get the hell out’ of a store because the owner was racist and she was disappointed that no one came to her aid. She says that this sort of this would never happen in Africa. She also mentions that when she first saw the man she married, she thought he was Chinese because of his eyes. Her husband mentioned that his family was not really happy with him marrying a foreigner. She also talks about her worry that her daughter may experience problems in school because she is mixed race. She also talked about her experiences with ganguro in Japan. Ganguro are girls who purposely darken their skin, some wanted to take a picture with her and Fidea felt that they resembled black people so she asked them why they dressed the way they did and they said ‘Black is best’. For me to explore the ganguro issue is another post on its own and I’ve got a long waiting list.

Okay so those are videos that tell us that at least 2 African women in this world are married to Asian men. In reality, I have mostly heard of such relationships through word of mouth and even at that, they are still scarce. I thought hard about it then I remembered! I actually knew a Zambian girl whose boyfriend was from Mongolia. I remember we must have been in class when she mentioned that she forgot something at her place and her boyfriend was bringing it to her. I assumed her boyfriend would either be African or white and he turned out to be Mongolian. He was one of those hip hop influenced guys with a cap and those puffy jackets. I think he even had a piercing. I remember being super excited, I asked her where he was from and how long they had been going out. I didn’t want to seem bothersome and/or ignorant so I shut up after those questions. However another girl was bold enough to ask the questions and I was eavesdropping. The girl asked the Zambian how her parents would react if she decided to marry an Asian man. I interrupted then and stated that there was nothing wrong with that and she could marry whoever she wanted. I think they broke up in the end though.

D revealed to me that she also went out with a Chinese guy and I was like ‘What else are you keeping from me!’. She told me the relationship ended because his parents were not open to the idea of him dating a non-Chinese girl and he also had identity issues as he was born in Britain. Which means I personally know two black girls who have gone out with Asian guys and through word of mouth the number becomes four. LOL.

Because I consume a lot of Asian media, it is only reasonable that most of my celebrity crushes are from that region. However the shock on people’s faces is priceless. I remember once in my Japanese evening class, I was on the hot seat. We were learning how to say that we had done something before in Japanese and our teacher gave us forms to fill out. We were to answer questions such as; When was the first time you wore lipstick? When was the first time you drank alcohol? etc.

The question that got me in trouble was ‘When was the first time you fell in love?’ and I answered honestly, I am yet to fall in love. But when my teacher saw my answer she was like ‘Eccentric-san, are you serious?’ and I still don’t understand why she reacted that way. So to cut a long story short, while I was trying to express myself eloquently in Japanese and explain my experiences, my friend J.L opened her mouth and said ‘Kanojo wa Asia no otoko ga suki‘ meaning that ‘She likes Asian men’ and my teacher stared at me and went ‘Honto?!’ which means ‘Really?!’. I was so embarrassed that day and I remember I blushed seriously. Our teacher had been trying to pair me with an English man but upon hearing J.L’s comments she suggested the Chinese-Malay student instead, the only other male in our class. That is what happens when men are the minority.

I know some women claim that they cannot find men of other races attractive. I wonder how that feels because I have never been someone who discriminated in terms of beauty. Beauty is beauty is beauty and it doesn’t matter your race, nationality, religion, creed etc. I have been told that appreciating beauty is a form of praising God and I’m definitely not arguing with that. I think the term ‘colourblind’ is so cliche and wrong so I’ll not use it but you get my meaning? I try to see beauty where it can be found. Anyway on to part two…eye candy. I shall begin with my celebrity crushes.

The first Asian media I consumed was in the form of Japanese animation and comics and crushing on drawings is not really feasible, people think I’m weird enough already. I remember one of my first crushes was Akanishi Jin.

*Sigh*. I watched this drama he was in Yukan Club and it didn’t help that he always had a lollipop in his mouth sometime during every single episode. He was also in Gokusen 2. Akanishi is a 24 year old singer and actor, he is part of a boy band called KAT-TUN the letters are derived from the names of the members. They had a show Cartoon KAT-TUN and I loved when they interviewed Chara and Crystal Kay. J.L had a crush on another member of KAT-TUN, Yuichi Nakamaru but she is now into Kinkee Kids. And I have seen a guy who looks almost exactly like Tatsuya Ueda. Also Akanishi is definitely the bad boy of the group, he composed a song called ‘Pinky‘ and the lyrics were a bit risque.

*Clears throat* the man who is currently pictured on the wallpaper of my phone is Pan Wei Bo (pictured below is the wallpaper), you know things are serious when I know his full Chinese name and that is the extent of my fan knowledge. His English name is Wilber Pan, he is a Taiwanese-American rapper and actor. I watched the series Miss No Good just because of him. I didn’t care if he was the mean hairdresser and I’m sorry to say but he doesn’t make a good couple with Rainie Yang!

Since we are in China now, I listened to Jay Chou (I don’t know his Chinese name how telling) but I never thought he was handsome until I watched Kung Fu Dunk, yes the movie wasn’t special but I liked it. Jay Chou is also a very talented musician, my favourite song is Blue and White Porcelian

I love this guy, honestly. I liked him even before I listened to his music I supported him. It was the crazy girl who this post is dedicated to that got me hooked on his latest album Rainism. I also enjoyed Ways to Avoid the Sun. Rain is a musician and an actor, he has entered the American market, performing with Omarion and he was in Speed Racer. The only reason I watched the movie, besides the fact that I watched the cartoons as a child, was that it was Rain’s acting debut in America. He has got another movie coming out soon Ninja Assasin and there is a potential interracial scene as he stars opposite Naomie Harris. I’m definitely watching this one. I’ve been waiting for it since last year! Here are pictures of Rain practicing for his role in the movie,

Here is the video for ‘Ways To Avoid The Sun’

And below is ‘Rainism‘ my best part of the song is ‘I’m gonna be a bad boy’ and when he mentioned ‘magic stick’. Rest assured Jung Ji Hoon will definitely make a comeback in his own post. 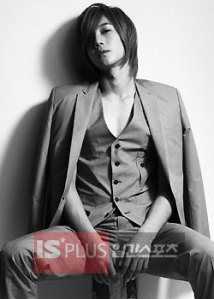 This is definitely not the end of this topic, I may need an excuse to search online for pictures of fine men again not to mention there are lots more out there n___n Till then, it is time for my much needed sleep.

And I couldn’t resist putting this picture up as well.